In the next mountain pass, after walking for days on snow, we encountered a band of Cyclops who, right after seeing us, began to cast stones downhill until they crushed wretched Euanthes and Dion, forcing the rest of us to retreat. 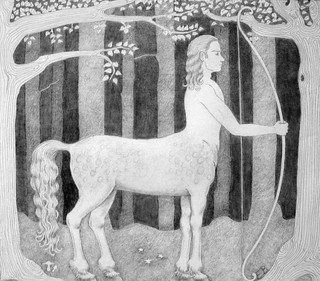 (read the first part of this tale here)

Seeing no other alternative in front of such beings as brutal as stubborn we decided to split into three groups and attempt the ascent separately and under cover of darkness, after agreeing to converge on the opposite step to continue our arduous march together. That night, a moonless night, accompanied by Demetrius, Ephialtes, Glauco and Leandro, I climbed quietly that slope of stone without almost being able to distinguish under my feet, and everything was fine until those beasts detected us when we began to descend the other side. At that time such a shower of missiles felt on us that a great avalanche of snow and rocks pulled me rolling tens of meters downhill. It hurt my leg and disoriented me completely, loosing sight of my peers. However, the fear of falling into the hands of those cannibal monsters kept me walking down as bad as I could, until daylight revealed a new and desolate landscape.

In front of me laid the Land of Fire: The sun and the wind punished a black sea of ​​dry and arid lava matted into amorphous piles of various sizes of sharp edges in which barely anything grew or lived but some stubble or some odd insect or lizard, and that I had to go through for three long days under a blazing sun as I limped and consumed my last food. At least I had not lost my goods after the scuffle with the Cyclops.

After that wild vastness I went up and down by barren gullies that flowed into deserts of black and red sand, always with the vision of a small volcano or group of volcanoes smoking in the distance, while columns of steam and clouds of sulfur arose here and there between rocks, poisoning the already hostile environment. I spotted some beings that looked alike plants devouring small rodents by digging traps filled with spikes on the floor they covered with their own leaves, huge worms with greenish membranes they spread on the rocks to sunbathe, and at night bats as big as vultures flying over the area in search of some prey.

Without water or food, exhausted and stumbling, I finally got rid of the money and my arms, but retained the gems, and continued on the edge of death, until I fortunately found, on the bottom of a deep ravine, a small oasis, a tiny garden of palm trees and vegetation growing on the banks of a deep and extensive pond.

I crawled up there, took a drink and passed out on the water’s edge. Then I do not know how long I slept until I heard a slight splash and some water splattered on my face. I opened my eyes, and in doing so I thought I was dreaming, for I saw, half submerged in the water, a lovely girl coming towards me. She was dark and very beautiful, with smooth and very long hair that reached her waist, brown skin, large and oval blue eyes, and a delicious body I could see through her soaked robe, with the sensual and attractive curves of a beautiful woman. While approaching me I realized she was not a normal girl, but a nymph, and I was scared, but this creature, once by my side, leaned over my battered body, and with the same water that ran down her hair refreshed my face and chest while smiling sweetly. Then she disappeared to return a little bit later with a bowl of fruit, and all that day she looked after and refreshed me feeding me on the shore of that pond I supposed was both her home and her mother.

I was there with her for two days while recovering. She did not speak, only hummed, smiled at me and treated me with infinite delicacy and tenderness, and I let her care and pamper me while lying in the shade of the trees until, strengthened, I could return to my feet. The moment she saw me she seemed very happy, and then began to incite and coax me to swim with her in the pond. Sweet Hebe knows she used her many powerful charms to do, and I let her do, so between games and caresses, she carried me where the water covered my waist, and once there clung to my body and started kissing me. Then I began to realize she was dragging me into the deep, and since I resisted, she pulled me over and over. I pulled away and struggled, but she insisted with unusual force. I looked at her face, and found no evil or cruel expression, but the same compromising and playful look that had started that game. I started swallowing water and sink, but with one last effort could break free and run to shore. I looked back. She remained in the pond, looking innocently, even sad and worried, as wondering if something bad happened. Gods know if she intended to harm me or if she was aware that she had been about to kill me. I do not know or will ever know, because I did not stay there to find out.

After leaving my sweet but dangerous savior I followed the stream until soon reached the sea, and from that point always walked at its side, hoping that, coasting westward,I could make it to Mindos. For two days I went through huge white sand beaches, I fished in the clear waters of the pools formed by the reefs just a few meters from the coast, and slept on the rocks I found in the cliffs. i always tried to travel at night, avoiding the scorching midday sun hours because the inland countryside remained as bleak as it had been before, and whenever I had time I climbed a dune or a rock in order to spot any orchard or stream where I could quench my thirst.

It was on one of those where I found finally Demetrius, Leandro, Clito, Ephialtes and Nereo, while resting in the shade of the few trees they had been able to find. Hanging out with them after so long and hard experience was a great pleasure, as well as it was seeing that, despite some minor injuries, they were safe and healthy, as it was also their cargo of silver, although I was saddened to hear that during the fight with Cyclops, where I got lost, they had seen dying, crushed or torn, Arsenio, Admes, Damon and Phaedrus, and had lost sight of the rest of the expedition. After catching up, celebrating our good fortune, and dividing up the load again, we continued coasting for three more days until, finally, we reached the Laurium bay from its eastern end, and we could see in the distance the white houses of Mindos.

These are the events that took place during the expedition in which I took part along with twenty more brave Tocreidos, and thus I describe to Laertes, king of Mindos, sister polis of Tocreida, and whose good all we sought when we joined the expedition. I congratulate to see the little money we have finally gathered has been enough to take from the stingy hiperbóreos the necessary goods that will enable this community to survive this harsh winter, and I pray Apollo and the rest of Gods that Learco, brother of the king, and the rest of the members of our expedition may appear soon in front of these walls, or at least send us news about their whereabouts.