Sorry, but you will see me married to a Gorgon before than sailing to Mindos with you, noble Learco. 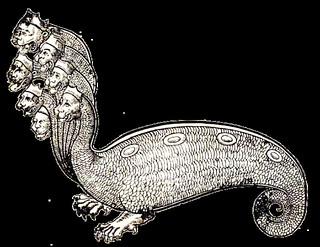 That was, to our dismay, the last and definitive answer we obtained from the only guide we could find throughout Priene, similar fate we experienced in Istros, Leontino or Tocra, although we had broken into those little towns so ostentatiously, noisily, with great pomp and pageantry and promising richness and substantial rewards. It is true that we had feared such a possibility from the very moment we lost sight of our beloved Tocreida over the horizon, but now it was time to face it and hold a council.

Learco spoke as leader and promoter of the expedition, lamenting again the poor judgment and excessive pride that impelled his brother Laertes to found a polis in such a remote place as was the Bay of Laurium, good and fertile lands those but also very risky, as could not be otherwise in a country full of volcanoes and mountains where a sudden eruption or a too harsh winter could ruin everything from overnight. Then, before he continued, Nereo wanted us to make clear that the penteconter was well furnished and full equipped, and that sea state and visibly were becoming worse everyday. Persephone had left her mother and went down to join her husband in Hades several weeks ago, he said, and the winter was coming close. Within a short time Neptune will make it very difficult and dangerous for us to journey above his water domains, so if we were going to do something, going home or continuing, we had to do it soon. Demetrio and Emeterio, the fighter brothers, and Hermogenes the traveler, were firmly determined to continue. We had not filled a vessel with silver and supplies and brought together more than twenty intrepid men for nothing, they argued. Ephialtes, Isadio, Demosthenes and Phaedrus, hunters and rangers, were confident we could make it without any guides. The wise and old Glauco urged us to move forward for the sake of our families and neighbors, who were suffering so terribly of hunger at that very moment. Eustace was of the same mind, as well as Damon, Admes, Euanthes and Arsenio, and the young Eudor emotionally reminded us the time in which that fragile skiff came to our shores, already thirty moons ago, with those ten men aboard looking like skeletons asking for help in the name of the love of all the gods in Olympus. Nearco, Dion and Bemus were reluctant, and came to suggest the desirability of postponing the expedition, but Leandro said that the inhabitants of Mindos could not stand that winter without those gems and silver we were sending them to trade in exchange of food with that stingy and miserable people who were the Hyperboreans. Alcander said we had already spent a good part of the supplies and resources our citizens donated us so generously, and the wanderer Clito made it clear that he would proceed, but that it was lawful to vote the issue and that every each of us made whatever he wishes, including returning home, because no one had ever dared to enter that dangerous territory without a guide. All those present voted, and decided, without exception, to go ahead.

We left the next morning at dawn, leaving behind the small hill on which Priene stood. The sea was rough, Boreas caused life on board to became increasingly bleak, the ship was buffeted, the days gradually became shorter, and the sky was becoming more and more threatening with each passing day.

After three long days the rising sun drew on the horizon a colossal wall of steep cliffs and crags among which raised the giant finger of Zeus, a huge mountain marking us the point through which we no longer could continue sailing. That dormant volcano of perennial snows, always hiding its summit after its own ring of clouds, fell to peak on the sea, and its titanic mass created its own treacherous regime of winds and currents, doing inadvisable to continue our journey by boat.

We landed on a beach of black sand where a small stream flowed. Before us the earth, of the same color, was covered with a thick blanket of pines of pleasant aroma. We beached, dismantled and conveniently hided the ship, equipped ourselves and started the ascent by a tongue of land that amounted zigzagging until the foothills of the great mountain. We always looked to deploy the usual three or four men in the vanguard and three more in the rearguard, always wearing our metal and linen armors, and always having our swords, shields, spears, bows and helmets close to us. Going always ready and aware in this manner while carrying the treasure and provisions on our shoulders did nothing but hinder and make more tiring our march, but it was absolutely necessary given the many dangers and lethal animals that harbored those places.

Three days of ascent took us to round the great mountain and completely lose sight of the sea. Halfway it rained for two days straight, which made our ascent even more painful, but at least those leafy pine minimally protected us from such an inclement weather. We slept all we could protected under blankets, woven branches or rocks, always on guard and prevented, the silver and provisions always in the center of the camp.

On the fourth day we continued climbing up the slopes of the great mountain, surrounded by a thin and sparse vegetation, when we cross the pass that led to Argotas valley. From up there we could distinguish, first, that impressive basin, that deep, lush ravine converted into orchard that stretched to the horizon winding through the mountains that ruled the Finger of Zeus, and running at the center of it, magnificent and roaring, the Argotas, that great river, whose flow, still no bigger than a cheerful mountain stream where we were, began to follow the valley below.

As we approached the edge of the oak forest that was forming as we descended, some ominous shadows made us hurry to enter into the thicket: The summit of the great mountain was inhabited by griffins, horrendous and huge creatures with lion´s body and eagle’s head and wings who probably took us as Arimaspians thieves of gold or as food but, as it may be, the fact is that we hurried into the trees as they flew closer to our heads. Since then, and until the vegetation became more dense, we had to permanently watch the sky, for these beasts patrolled the upper valley, especially during the day, frightening us all the time with their creepy cries.

After two days of descent trees tightened, especially along the river, but there was still room for wide green meadows of tall grass, in one of which a group of centaurs decided to ambush us. Suddenly our vanguard burst running and yelling, and we barely had time to form a defensive circle when we had them above us, riding around us as they fiercely shoot at us. Thanks to our shield wall and our own arrows we made them withdraw and retreat leaving two dead in the grass, but we had to mourn the loss of Bemus, who was shot in the back before we could organize ourselves. It lasted four days and nights the harassment of those impulsive and fierce beings. We performed various sacrifices and offerings of animals to try to appease their anger, walked always alert and armed, advanced slowly, hardly slept, avoided lighting fires, tried to walk through the bush to counteract their superior speed their four legs brought them on open ground, and every now their arrows whistled crashing into trees or into our shields. We managed to hold them off almost all the time, although one night the young Eustace was sewn by arrows while standing guard.

Eventually the centaurs left, but when we wanted to realize we had entered into deep forest. Oaks and birches grew incredibly crowded, while hiding sunlight, moisture as dense fog perennially floated in the air, and we always heard but rarely could see the Argotas, which never ceased to roar loudly through that enchanted valley. Exotic animals and mythical creatures inhabited that wilderness: great running birds that did not know how to fly, flying lizards with a small diamond-shaped tail, fishes as big as pigs that crawled out of the water, owls with cat face and paws, white little mice with long tails stretching from tree to tree thanks to four fragile wings similar to those of butterflies, armored centipedes big as snakes, wild cats big as wolves barbed with spikes and with tongue of cobra, funny small peeled creatures of short legs that used to lick our hands with tongues shaping as a spiral, and even some intelligent and nosy birds of beautiful plumage that imitated our voices and words so perfectly that forced us to communicate through whispers and gestures because of the confusion they caused among our group.

One morning Nearchus was found dead, bled and with two fang marks on his neck, and soon the good Alcander suffered the same fate. We maximized caution, because we did not know what new danger we faced, until one night the old Glauco showed us the body of a beautiful and desirable woman of bewitching cat eyes, swollen lips and breasts of sin, whose body, from the waist down, was a huge snake. It was a Lamia, he said, that female being that seduces young men in order to suck their blood and, thanks to Zeus, that had failed to deceive him despite its obvious charms.

We cross the thick forest and the valley after a week of march, when we reached the majestic waterfall where Argotas falls into a deep canyon through which it continues its rugged course. We descended abruptly as the shower from the majestic waterfall seeped our bones, and then continued four days by the edge of the gorge, without losing sight of the course of that river that continued to roar beneath our feet. Nesting on its steep walls we found a kind of small flying creatures of body and hands similar to apes, alligator tail and a shaggy head remotely similar to that of a bird that did nothing but harass us and exploit any occasion they had to steal our food.

After much advance the canyon ended and the river, before wild, gently opened to a wide and open plain where its power curbed. There we had to cross, for two days, a huge and filthy swamp populated by giant dragonflies, leeches, thousands of snakes, toads big as dogs that spewed fire and a kind of giant angry rats we were constantly forced to hunt down. The stench of stinking mud was such that many of us felt sick, sometimes we were forced to advance with the stinking water reaching our chest, and whenever we stopped to spend the night and could not find any solid ground we had to lie on sharp rocks and rotting logs.

After all that we left the valley and headed toward a new chain of mountains we had to overcome in order to enter the Land of Fire. As we climbed the landscape changed from forest to pasture, and from pasture to tundra, and soon the cold and snow were present. We were exhausted and, last but not least, in those bare slopes inhabited manticores, horrible and very dangerous beings we kept at bay during the three days that lasted the ascension, and that had the look of scorpion-tailed lions with the disturbing face of a man whose expression passed within seconds from a frightening and bewildering vacuum to a hellish fierceness as they opened their lethal and cruel jaws.