Gentrification is nothing but a new episode in any city with some history, an episode in which the upper classes are curiously making an inverse movement to the one they undertook during the last century.

(read the first part of this article here)

Brief history of a city

At first, perhaps in ancient times, or whenever any given city was founded, the best and most coveted place to live was indisputably the city downtown. It was in the city center were government buildings were, as well as the main square, the Forum, the largest and best temples, palaces, monuments, theatres, baths, operas and so on, all walled protected. It was the most comfortable, most prestigious and safest area to live in, and as the noble did before them, the bourgeoisie and anyone with enough resources coveted living as close to the center as possible, while peripheral areas were often populated by humble citizens and workers who mostly came from the countryside or from other regions increasingly attracted by those job opportunities accumulated within the city limits. Some opposing processes like the ones that happened during the Late Roman Empire or the Early Middle Ages, when population actually left the villages and moved to the countryside, were only parentheses in a situation that was reactivated as the global economy, and the cities with it, developed again.

After some time, and thanks to the growing capitalism and the industrialisation, people in cities began to cram, mostly poor workers and immigrants who flocked to work in factories, and in the opinion of the wealthier citizens central areas began to lose appeal. The situation was reversed, and while the center was filled with lower classes populating increasingly overcrowded and unhealthy neighbourhoods, and except from some of those original bohemians we mentioned before, bourgeoisie began to build their “enlargements” far from the downtown, those more spacious, clean and bright neighbourhoods impeccably designed with their wide avenues and boulevards, parks, fountains and all kinds of utilities, and filled by large houses, villas and mansions.

The attractiveness of the city center, however, was always there, and very recently bourgeois and yuppie´s offspring wanted to return there again, perhaps not wanting to ultimately resign to pay the price of having to be far from their favourite leisure places and jobs by living in their comfortable and pristine but isolated residential areas. 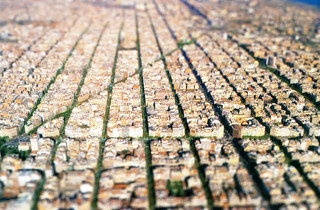 La bohème is taking over the cities

An interesting discussion lies on the fact of whether these new residents, these moderns, these posh and “alternative” youngsters, these hipsters, are victims or rather perpetrators of this gentrification process, even if they are likely to be both, a kind of spearhead of those revaluation process who, at some point, became also victims of the same forces they helped to unleash.

Truth, however, is that gentrification is a fact, an even if a widespread one, already born on the eighties, it is only nowadays that the long list of gentrified cities attracts attention from sociologists, media and social groups.

Resistance against this is as common as its first appearance, although ultimately has been of very little use: vandalism and boycotts against bourgeois establishments, occupations, demonstrations, platforms and groups of all types, and even several documentaries that have recently come to light served to raise knowledge of these dynamics but not to stop them, at least not yet.

A consequence of a deeply unequal world

As happened to that fictional passer-by who wondered whether what had just happened to the neighbourhood was good or bad, it is also questionable whether gentrification is, ultimately, something good, or bad, or whether it is simply life, meaning there might be nothing to do about it.

Before venturing any judgment, however, it first has to be said that the question of gentrification should not be addressed from a purely superficial and disjointed bias, because if so perspective can be lost and the issue would remain simply as a curiosity or a mere anecdote. There is not much point into discussing frivolous details such as whether hipster´s aesthetic is better or worse, whether their premises are boring and snooty or genuine, or whether the neighbourhood looks better after its restructuring from an architectural or aesthetical point of view. Neither does the discussion about its consequences if they do not fall within the proper context, because its various features can be misleading if they are not seen all together. This meaning that, for example, it can be argued that of course it is, in principle, a good thing that an impoverished neighbourhood develops, is equipped with better infrastructures and filled with people carrying more money; of course it is desirable that in a free country every citizen has the right to live where he pleases and, if so, if hipsters want to live in the central area there should not be anything that might stop them; and of course it is also good that there might be people who could even make money out of something that, in principle, is about improving a neighbourhood. But is that all? 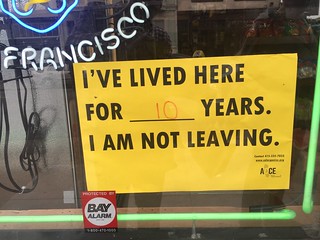 Gentrification is not coming from nowhere, this is, it did not happened by chance or by mere fashion. It arises from a general social context, and that context is neither more nor less than the dramatic social inequities that, far from soften, are becoming bigger within our society. Gentrification is a reflection and a consequence of a world where the gap between rich and poor is growing and is now greater than ever before. Moreover, it is a proof that social classes exist, that class struggle is a daily reality, that there are indeed rich and poor, advantaged and disadvantaged, and that the latter very usually lose their fights, at least currently.

The truth is, in reality, that gentrification does not benefit everyone, but only a few, which is those who are wealthy. That is, it is a process designed by and for the upper classes, which benefits those with money, not the poor. For as we have seen, is certainly good for a neighbourhood to tidy up, to develop and thrive, but it is not worthy if, in return, most of its neighbours lose their homes, nor is it so good and, above all, fair, if everything happens at the expense of others, to the detriment of others, and is not so good that only a minority benefits from it, while a majority loses and becomes homeless at least for a while.

(The case of Luz neighbourhood, in São Paulo)

Maybe that lifelong neighbourhood in which our story initially began was not the best place to live, maybe it could be widely improved, in fact it is hardly worth discussing it because yes, certainly it could be, because its defects were right there, at everyone´s sight, but it should be remembered also that it is, or it was, above all, a home for many people, people that could not afford to live elsewhere, and whose situation becomes precarious due to people who can choose where to live.

Apart from the scavenger and ruthless nature of real estate business, problem here begins with those new inhabitants whose attitude is often so hypocritical as it is their own subculture, supposedly alternative but deeply consumerist. When those modern youngsters begin to settle in that humble neighbourhood they mostly allege they do so because they love that very same neighbourhood, but such a curious way of loving this is in which, far from adapting to and assimilating its lifestyle, they immediately try to transform it into something different from what it used to be before, and curious is also that original conception of what a neighbourhood is when its main factor, which are people, the neighbours, is utterly forgotten and, even worse, rejected. What a difference if those new tenants were content to buy and eat on those typical locals and business, if they decided to stick together with the former tenants and join some kind of group or association in order to avoid a generalised rise in prices, if they did not intend to live in humble surroundings without giving up their high-income salaries or without using their daddy and mummy´s money, or if they ever supported inclusive plans aiming to preserve previous residents and include them into those revaluation processes that very often tend to exclude them. Needless to say, however, that almost never happens. 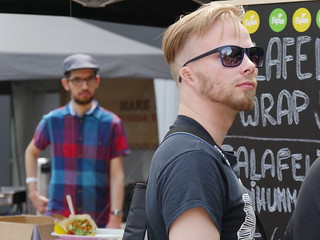 (We like this neighbourhood… but in our own way, of course)

George Bernard Shaw said once that “in an ugly and unhappy world the richest man can purchase nothing but ugliness and unhappiness,” but while it may be true from a general overview, truth is that rich often strive hard to conceal such ugliness. Gentrification is an example of this, when wealthy people suddenly decide to transform the city at their own will, washing its face and making it more beautiful and better even at the cost of expelling those lower classes that contributed to make it, according to some, rather ugly and unhappy.

The next time you see they are tidying up the neighbourhood, and before you start to unconsciously rejoice, think about what might be really happening there instead. Especially if it is your own neighbourhood.

Meanwhile, media scarcely echoes all this, though cinema often found inspiration on it to build some good plots, as we can see on the entertaining documentary Ficción Inmobiliaria (Real Estate Fiction):

2 responses to “Gentrification, not in my backyard (part 2)”