Night was gone. Rumors of shooting awoke him. It was dawn and he was sleeping beside princess. They had lain together in that remote corner of the island. 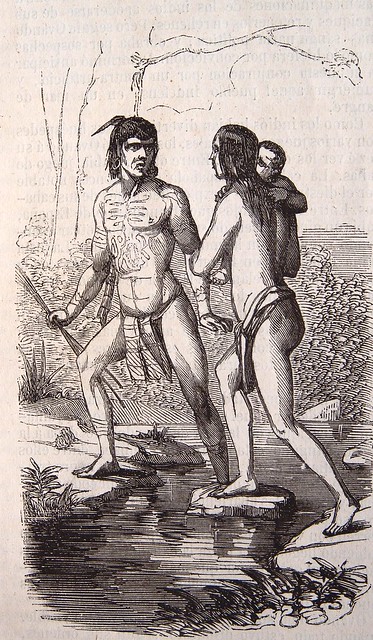 She had told him all about Tiki-Maru on their way to that place, all about their dreams and so on, but only when they reached that place, and only when she had seized him with her arms, had she told him about Maru´s revelations. She had sworn she did not know what would happen, that she thought Maru had conceived something the great dreamers, the mothers-tree and many young people had understood, but she did not, so she did not really know what it was exactly. The only thing that was certain, she said, is that it would be something dangerous, and therefore begged him to stay with her that night.

He had consented. He knew war was an incomprehensible concept for those people, and for hours an officials meeting had probably taken place, in which the most appropriate measures had probably taken place. In the most unlikely event of an attack he supposed it would take place only within a few days, because the villages were quite far from each other on that island, and those people, inexperienced in fighting, might take some time to organize and equip. But he had underestimated the outstanding collective consciousness the Dreamers had.

Gunfire sounded again, and a dense smoke began to rise far away. Princess woke up too. When she realized what was happening, she looked him frightened and worried, as if imploring forgiveness. But she did not need it. His apostle had already decided that she was not guilty of anything, just of loving him deeply, and replied with a kiss. Then they dressed and ran back to the beach.

It took almost an hour to arrive, and when they did it all seemed to be over. Princess begged him to stay away, forcing him to hide in the bushes and, after a while, returned paddling a small boat. When arriving she told him she had seen many deaths of both races laying on the are of the huts close to the beach, many armed young Dreamers, defaced and pacing back and forth, and that there seemed to be no living white man on the island, but that the big boat was intact, floating in the bay full of withe people, so, she implored him to take that canoe and go on board. He first struggled between joining the battle or going to the frigate, and then between leaving the island or staying with her. He asked her to go with him, then he insisted on staying with her, but Princess, sweet and patiently, refused everything until she convinced him, crying, to take the boat and go to the frigate. They parted without knowing whether it would be forever or not, after a never ending kiss, and drifted away until they could no longer see each other again.

As he was near the Jupiter he made signals to avoid being shot. A boat was approaching, like his, to the ship, equally full of sailors, marines soldiers and wounded. On the island, beyond the beach, great columns of smoke rose, and a large crowd of running Indians could be seen here and there. No more gunfire sounded though.

He boarded at the right time. Lieutenant Alvarez wanted to open fire with all available batteries on the island, and paced the quarterdeck in a rage, shouting, cursing and ranting. The captain, with downcast look, hold on the shrouds while watching the mainland, trying to think. Villaboa, slightly wounded in the arm, watched both his friend and captain, eager to receive the order to raze that piece of land. Two of the lieutenants, including one of his friends, and also Gonzalo, the first mate, as well as the chaplain, several gunners, apprentices and sea officials were missing on deck, as also was the undesirable Sierralta, but at least he could see Navas mending several wounded. He listened again to Villaboa demanding revenge and asking the immediate bombardment of the island, and forgetting ranks and discipline he headed straight toward him blinded by rage, grabbed him by the jacket, slammed him into the mizzen and loudly, so that everybody could listen, snapped:
-Bombarding the island you say? As a revenge you say? Do you want to revenge? Very well! Let’s start with you officer! You, evil idiot, you should have died in the midst of this disaster which you so much helped to cause, you that with your negligence and stupidity have killed so many of our people and spoiled this entire mission. You, after all those events, you still intend to cause even more death and suffering. People like you are just so stupid and yet so pernicious as to reach an island where its inhabitants do not even conceive what “war” is and begin successful in less than a month to be attacked and unleash a blood bath. The voices of our dead comrades will resonate in your conscience, if you have any, for the rest of your days, official, and no matter how many Indians you might kill now, you will never silence them, so better shut up right now, or the remaining crew and myself will give free rein to that revenge you so much want starting with your sad person.

Everybody around him were silent, petrified. Alvarez shook off his attacker and looked around to find the hostile stares of almost everyone, so he turned, white and sweaty face, and dropped to the deck to monitor the maneuvers of sailing. Villaboa avoided his gaze, head down, and began to check his depleted platoon. When the captain pulled himself together, he took back control and gave the appropriate orders to leave as soon as possible, reorganize the ship and treat the injured. Then he turned to his second lieutenant, and said: <Officer, take charge and take your place>, and then very quietly: <well done son, but now cool down and pay attention, recover, we are sailing.>

While weighing anchors and unfurled sails the young officer had finally a moment of peace, and watched from the stern the beautiful beach where he had slept that night. Clouds of smoke rose into the sky. Almost sixty sailors, officers and marines were laying on land, including several friends, but they had also lost that bastard of Sierralta, he hoped by now butchered or impaled by Maru’s own hands. God knew how many Dreamers have died under their fire, maybe hundreds, and how many years would their recently acquired distrust from whites last.

At least Princesa would be safe, for now. The Tiki-Maru had introduced these people into the same idea of ​​war, thanks to the excesses of Sierralta and company, and that would have consequences, for sure. It was only a matter of time before another Tiki arose from dream-world and introduce the idea of ​​war between them Dreamers, and who knows what would become of them then, of the whole tribe and Princess. Facing such thoughts he wished with all his strength he would be able to return to that island, but what he was doing was just the opposite, I was sailing away and perhaps, he thought, had to resign himself to not being able to return anymore. In conceiving that he felt suddenly about to faint, but just at that moment recalled the words his friend had told him before leaving, and that put a bittersweet smile on his face.

Listen, my apostle -she had told him- the dream-world spirits have taught me something tonight while you were sleeping. I am a dreamer and I can dream of you whenever I want to get back to you. I can be besides you forever, even if it would be much sweeter to have you here as well, both in the dream-world and the land-world. But even if you know nothing of the dream-world, you can also always stay with me, because you are an apostle, you write, and writing you are able to make me eternal and immortal, and return to me with whenever you want. If we do not see each other at least we will always live in each other, and will have the power to evoke the other, so do not say forever goodbye, just say see you next time, and now go, for I desire you will follow many moons still living in the land-world, for you too, even if you never get to learn anything about the dream-world, at least to have me when writing.

One response to “Dream Island (part 3)”